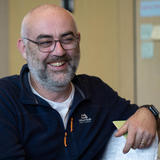 Software architect and director at ThoughtWorks

James Lewis is a software architect and director at ThoughtWorks based in the UK. He’s proud to have been a part of ThoughtWorks’ journey for fifteen years and it’s ongoing mission of delivering technical excellence for its clients and in amplifying positive social change for an equitable future. As a member of the ThoughtWorks Technical Advisory Board, the group that creates the Technology Radar, he contributes to industry adoption of open source and other tools, techniques, platforms and languages.

He is an internationally recognised expert on software architecture and design and on its intersection with organisational design and lean product development. As such he’s been a guest editor for IEEE Software, written articles, delivered training and spoken at more conferences than he can remember.

James defined the new microservices architectural style back in 2014 along with Martin Fowler. Currently the microservices industry is worth in excess of $20 billion annually. James’ primary consulting focus these days is on helping organisations with technology strategy, distributed systems design and adoption of SOA. He freely admits that it’s only by standing on the shoulders of giants that he’s been able to make the contributions to the industry that he has."

Check out some of James’ past talks:

Other Events with James Lewis