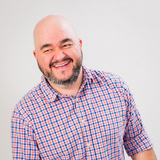 Geoffrey (“Geo”) has been breaking computers since he tinkered around on his family’s 286 in the 1980s. He’s developed software professionally in many languages over the years (PHP, Perl, Javascript, Ruby, Elixir) but Elixir is his favorite so far. By day, he’s a developer at Planning Center. By night, he likes to dabble in various hobbies including sim racing, modular synthesizers, embedded hardware, music, and hanging out with his family. If there’s something new to learn, he’s probably interested!

On top of that he's the author of Phoenix in Action and speaker at many conferences.