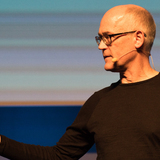 Dr. Danny Lange is Vice President of AI and Machine Learning at Unity Technologies where he leads multiple initiatives in the field of applied Artificial Intelligence. Unity is the creator of a flexible and high-performance end-to-end development platform used to create rich interactive 2D, 3D, VR and AR experiences.

Danny spent 8 years on Speech Recognition Systems, first as CTO of General Magic, Inc., and then as founder of his own company, Vocomo Software. During this time, he was working on General Motor’s OnStar Virtual Advisor, one of the largest deployments of an intelligent personal assistant until Siri. Danny started his career as a Computer Scientist at IBM Research.

Danny holds MS and Ph.D. degrees in Computer Science from the Technical University of Denmark. He is a member of ACM and IEEE Computer Society and has numerous patents to his credit.