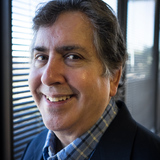 Award-winning AI pioneer who created the landmark Machine Learning program, AM, in 1976 and CEO of Cycorp

Doug Lenat, Ph.D., contributor, is a pioneer in artificial intelligence. Dr. Lenat is founder of the long-standing Cyc project and CEO of Cycorp, a provider of semantic technologies for unprecedented common sense reasoning. He has been a Professor of Computer Science at Carnegie-Mellon and Stanford and has received numerous honors, including the bi-annual IJCAI Computers and Thought Award (the highest honor in Artificial Intelligence). Dr. Lenat is a founder and Advisory Board member of TTI Vanguard, where he continues to co-run four conferences each year. Doug also holds the distinction of being the only individual to have served on the Scientific Advisory Boards of both Microsoft and Apple.

The Promise and Limitations of AI
Doug Lenat
Tuesday Apr 30, 09:00