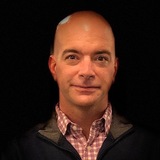 Matt Danforth has been futzing with computers for as long as he can remember. Playing games on a Commodore PET with a tape drive, or coding in BASIC on a greenscreen Apple II led to studying Computer Science in college and starting a career in the dot-com bubble.

UI became an accidental focus because he was the only one crazy enough to fight through Javascript (no console was fun) and it has led to a fulfilling career. Focusing on front-end has not diminished his interest in all other aspects of application design and his experience at some great organizations has given him insight on all aspects of application development.

Having been a Developer, a Senior Director, and now a Principal UI Engineer at Enova International gives Matt a unique perspective he is willing and excited to share.

When he’s not working, he’s usually fishing, riding a motorcycle, or pondering ways to combine the two passions.