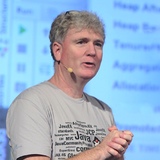 Kirk knows more about the JVM than most of the engineers that actually build it do. Let him take you to the secrets and dark corners of the JVM. #java

Kirk has been performance tuning Java applications for over 20 years. He is a frequent speaker at JUGs and conferences worldwide and has been named a JavaONE rockstar numerous times. Kirk authored the original Java performance tuning workshop and jPDM, a performance diagnostic model. This model is the core of the diagnostic engine developed by JClarity, a startup co-founded by Kirk. In 2006 Kirk was named as a Java Champion. More recently he was named as part of the Oracle Groundbreakers and InfoQ influencers. Kirk continues to be an ardent supporter of the Java community, co-founding JCrete, a Java unconference and by helping others establish Java (un)conferences worldwide.

Tech Specialties: Author, speaker, consultant, Kirk was recognized as a 2006 Java Champion recipient for his contributions to the Java community.