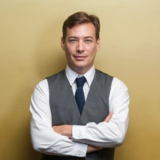 Brian Ray is the Cognitive Team Lead for Deloitte Consulting LLP and is heading the mission of solving complex analytical problems for major businesses worldwide though the power of data science.

A big picture strategist, team builder and influential top technologist, he has extensive expertise in enabling products with Cognitive Data Science— from engineering and architecture, to hands-on integration and deployment of best-in-class solutions.

Mr. Ray leads the Data Science group responsible for adding Cognitive features to all the Catalyst funded projects. Through his foresight and direction, the firm has undertaken its newest innovation funded by a Catalyst fund designed to add cognitive enabled solutions to the marketplace. His team is fully dedicated to adding Cognitive features to 5 other use cases, including the products: Indirect Tax Recovery, CogSpend Analytics, Audit Tie-Out, and several unannounced use cases.

In the past, Mr. Ray lead the agile software operations with Deloitte's Analytics team in the Enterprise Science division. Over two years, he has built, led and mentored a first-rate team that uses a multi-disciplinary approach of natural language processing (NLP), machine learning, text analytics and open source to offer a clearer picture of the written word to clients. Through his foresight and direction, the firm has undertaken its newest innovation with Deloitte Open Text Classification Engine (DOTCE) to mine unstructured data for increased corporate performance. Mr. Ray maintains, advises, and helps staff consulting engagements using DOTCE.

Mr. Ray is key in building community inside the firm and out. He helps organize Data Science related events including those part of the Data Science Community of Practice within the firm. Outside work, he is the founder and primary organizer of ChiPy, the Chicago Python User Group, which, since 2003, has become one of the world's most active programming language special interest groups with over 1,000 active members and many prestigious alumni.

Highly recognized in the industry, Mr. Ray was named in 2011 to Crain’s Chicago Business’ top “Tech 25.” He was an early presenter at Google, speaking on Python technology in 2006, and has continued speaking at major conferences and businesses across the country every year.

Over a prolific 15+ year career, Mr. Ray’s capabilities have spanned across industries. He started as lead architect of new media for Precision Dialogue, managing the startup division in enhanced digital marketing and authoring software solutions for Fortune 500 companies. He worked as a senior software engineer for a high traffic coupon website and wrote its first-ever online loyalty program. He went on to be senior software engineer for Textura, a construction management software tool firm, where he was a key player leading up to the company’s IPO on the NYSE.

His most notable successes for major brands include developing a leading edge, predictive modeling software for clinical trials for Abbott, the global healthcare company; consulting Chicago-area startups like SpotHero and 1871; creating the first ever analytic and data marketing elements software for Sprint PCS’s loyalty program; and working with Adobe technology to transfer from Motorola to the Intel computer chip on the Macintosh platform.

Mr. Ray earned his degree in Computer Science from Roosevelt University. He is a native and current resident of Chicago, where he is a distinctive voice in the local business community.

Cognitive from the Engineering perspective
Brian Ray
Monday May 1, 15:40