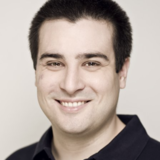 Philipp Bauknecht, CEO of medialesson GmbH, is a senior software architect and user experience expert creating apps for Windows, iOS, Android and the Web. He helps companies to build rich user experiences as a consultant, developer and trainer.

Since 2008, Philipp conveys his .NET and user experience know-how as a trainer for Microsoft, as a writer of numerous training clips and webcasts and as a speaker at numerous developer and designer conferences. Furthermore he teaches interface design at the University of Applied Sciences Pforzheim.

Because of his ability to unify design and technique, Philipp received the award “100 young creative talents“ by the European Union and the Committee of the Regions. Philipp is one of the founding members of the network EF.EU – European Forum for Enhanced Usability, established in 2009 and received the Microsoft MVP Award for Client Development in 2013, 2014, 2015 and 2016.