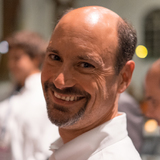 Randy has spent more than two decades building distributed systems and high performing teams and has worked as a senior technology leader at eBay, Google and Stitch Fix. He coaches CTOs, advises companies and generally makes a nuisance of himself wherever possible. Most recently, he was VP of engineering at WeWork in San Francisco, and is particularly interested in the nexus between culture, technology and organization.

Effective Microservices in a Data-Centric World
Randy Shoup
Tuesday May 2, 14:35