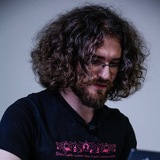 Jérôme was part of the team that built, scaled, and operated the dotCloud PAAS, before that company became Docker. He worked seven years at the container startup, where he wore countless hats and ran containers in production before it was cool. He loves to share what he knows, which led him to give hundreds of talks and demos on containers, Docker, and Kubernetes. He trained thousands of people to deploy their apps in confidence on these platforms, and continues to do so as an independent consultant. He values diversity, and strives to be a good ally, or at least a decent social justice sidekick. He also collects musical instruments and can arguably play the theme of Zelda on a dozen of them.