For a century the car industry has used racing to drive innovation. But with self-driving cars, it's not happening. Companies are more concerned about embarrassing and expensive failures than speed and nimbleness, so much so that the biggest risk of robocars on the roads is slowing and blocking traffic. Fortunately, we don't have to wait for the big robocar makers to put their pedal to the metal — we can do it ourselves. Ten years ago, Chris helped kick start the modern drone industry by adding the letters "DIY" to what was until then the sole domain of governments and aerospace companies, and today we have millions of DIY drones in the air.

Now the same thing is happening with autonomous cars, where for less than $400 you can make your own small autonomous car that uses the same kinds of sensors and AI code as the full-size one, but can be used safely indoors.

In this talk, Chris will talk about what DIY robocars races — which now include more than 10,000 people in events around the world — can teach us about autonomy, how to build and race them and the next steps in sensors and software that allowed them to beat the fastest humans earlier this year. 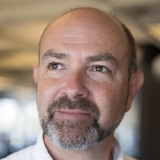